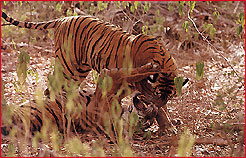 A wildlife retreat, where history and nature meet, Bandhavgarh is not too far away from Kanha. Set amidst the Vindhyan ranges, the Park has a series of ridges running through it. Initially just 105.40 sq. km. in area, Bandhavgarh with 25 resident tigers, was noted for its high density tiger population. Today, it has been extended to an area of 437 sq. km.

About half the Park is covered with fine stands of sal, while mixed forests are found in the higher reaches of the hills. Stretches of bamboo and grasslands extend to the north.

The main viewing area is still in the core of the Park with its 32 picturesque, wooded hills. An ancient fort up on a precipice, 800 metres high, dominates the Park.

Bandhavgarh's history goes back 2000 years in time and the earliest signs of habitation can be seen in the Caves excavated from the cliffs to the north of the fort. Brahmi inscription here, date back to the 1st century BC A hunting reserve of the roya! family of Rewa in more recent times, Bandhavgarh was declared a Park in 1968. This is where the famous white tigers of Rewa were discovered.

Wandering through the Park on elephant back, the chances of seeing a tiger are quite good. Also to be seen here are nilgai, chausingha, chital, chinkara, wild boar and sometimes a fox or jackal. Other inhabitants of the Park include the muntjac, jungle cat, ratel, hyena, porcupine, the rhesus macaque and the black-faced langur. About 150 species of birds are also found here and include the migratory birds that arrive in winter like the steppe eagle and various water birds.

It is possible to climb up to the Bandhavgarh fort for a breathtaking bird's-eye view of the Park and there is also a small population of black buck that lives here, protected from the predators below.