Day 01 ARRIVE DELHI
Company representative will receive you on arrival at the international airport in Delhi late in the night or midnight. Transfer to your hotel. Relax.

Delhi, the capital of kingdoms and empires is now a sprawling metropolis with a fascinating blend of the past and the present. It is a perfect introduction to the composite culture of an ancient land. Overnight will be at Delhi.


Day 02 DELHI
After breakfast, morning sightseeing tour of Old Delhi with rickshaw ride in Chandni Chowk Area.
Old Delhi - A sight-seeing tour of Old Delhi would entail visiting the Raj Ghat - the memorial site where Mahatma Gandhi was cremated; Jama Masjid - the largest mosque in India and the Red Fort - once the most opulent fort and palace of the Moghul Empire.

Afternoon sightseeing tour of New Delhi.
New Delhi - An extensive sight-seeing tour of New Delhi would include a visit to the Humayun's Tomb, the Qutub Minar, a drive along the ceremonial avenue - Rajpath, past the imposing India Gate, Parliament House, the President's Residence and would end with a drive through the Diplomatic Enclave.
Overnight at Hotel


Day 03 DELHI / NAGPUR / KANHA
Early morning check out from the hotel and transfer to airport to board flight for Nagpur.
IC 871 Delhi/Nagpur 0550/0715 Hrs
On arrival at Nagpur , start drive to Kanha (300 km/6 hrs).
Kanha National Park, which is one of the most well known tiger reserves worldwide, is located among the Banjar and Halon valleys in the Mandla / Balaghat districts of the state of Madhya Pradesh. It's creation took place among, and after, a lot of turbulence and storm within concerned circles regarding rampant killing of wildlife in the area at the time. The central Kanha valley was declared a sanctuary way back in 1933 but got its status as a National Park in 1955. It covers a large area of 1,945 square kilometers, out of which 940 square kilometers form the main park. The altitude of the park ranges from 450 meters to 900 meters above sea level.
On arrival at Kanha , check into Kanha Jungle Lodge.
Overnight at Kanha Jungle Lodge.

Day 07 KANHA / BANDHAVGRAH
After breakfast drive to Bandhavgarh National Park.
Bandhavgarh National Park : Wildlife retreat, where history and nature meet. Set amidst the Vindhyan ranges, the Park has a series of ridges running through it. Initially just 105.40 sq. km. in area, Bandhavgarh with 25 resident tigers, was noted for its high-density tiger population. Today, it has been extended to an area of 437 sq. km. About half the Park is covered with fine stands of Sal, while mixed forests are found in the higher reaches of the hills. Stretches of bamboo and grasslands extend to the north. The main viewing area is still in the core of the Park with its 32 picturesque, wooded hills. An ancient fort up on a precipice, 800 metres high, dominates the Park.Bandhavgarh's history goes back 2000 years in time and the earliest signs of habitation can be seen in the Caves excavated from the cliffs to the north of the fort. Brahmi inscription here, date back to the 1st century BC a hunting reserve of the royal family of Rewa in more recent times, Bandhavgarh was declared a Park in 1968. This is where the famous white tigers of Rewa were discovered.Wandering through the Park on elephant back, the chances of seeing a tiger are quite good. Also to be seen here are nilgai, chausingha, chital, chinkara, wild boar and sometimes a fox or jackal. Other inhabitants of the Park include the muntjac, jungle cat, ratel, hyena, porcupine, the rhesus macaque and the black-faced langur. About 150 species of birds are also found here and include the migratory birds that arrive in winter like the steppe eagle and various water birds.It is possible to climb up to the Bandhavgarh fort for a breathtaking bird's-eye view of the Park and there is also a small population of black buck that lives here, protected from the predators below.
On arrival at Bandhavgarh , check into Bandhavgarh Jungle Lodge.
Overnight at Bandhavgarh Jungle Lodge. 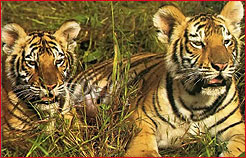 Day 11 BANDHAVGARH/KHAJURAHO
After breakfast and check out drive to Khajuraho.
Khajuraho - Situated in the northernmost part of Madhya Pradesh, Khajuraho is famous for its enchanting temples and its legendary Khajuraho dance festival. The name Khajuraho is derived from the Khajur tree (the date palm tree), which is grown abundantly in the region.
On arrival at Khajuraho, check into hotel.
Afterwards visit the Eastern group of Temples.
Overnight at hotel.

Day 13 Agra
Agra - Badal Singh established the city of Taj in 1475 AD. Agra finds mention in the Mahabharat as Agraban. Sikandar Lodi made Agra his capital but Babur defeated the Lodis to capture not only Agra but also laid the foundation of the Mughal Empire. In the mid 16th century and earlier 17th century AD, Agra witnessed a frenzied building activity and it was during this time when the symbol of love Taj Mahal was built.
Visit to Taj Mahal by Sunrise
Taj Mahal: Little needs to be said about this architectural wonder which is always the soul raison-de-etre for every tourist's visit to Agra. Built by Shah Jahan, the Taj is a white marble memorial to his beautiful wife Mumtaz Mahal. This monument took 22 years to be completed and was designed, and planned by Persian architect Ustad Isa. Apart from its stunning design balance and perfect symmetry, the Taj is also noted particularly for its elegant domes, intricately carved screens and some of the best inlay work ever seen.

After breakfast and check out drive towards Jaipur visiting Fatehpur Sikri en route.
Afternoon visit Agra Fort and Mausoleum of Itmad-Ud-Ula.
Red fort, which was built by Emperor Akbar in 1565, and additions were made up until the time of his grandson, Shah Jahan. It contains the hall of public and private audiences amongst many other beautiful structues; Itmad-ud-daulah, which was contructed by Nur Jahan between 1622 and 1628 and is very similar to the tomb she constructed for her husband, Jehangir, near Lahore in Pakistan.
Overnight at hotel 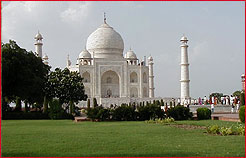 Day 14 AGRA-FATEHPUR SIKRI-JAIPUR
Fatehpur Sikri - The Red Sandstone City, Emperor Akbar built as his capital and palace in the late 16th century. Also visit the Bulund Darwaza, the largest gateway in the world.
Continue driving to Jaipur. Arrive Jaipur by late afternoon.
Evening free for independent activities or stroll into local Johari Bazaar.
Jaipur: The capital city of the state of Rajasthan, also know as "Pink City" owes its name, its foundation and planning to the great warrior astronomer Maharaja Jai Singh II. The city of Jaipur has broad avenues. The city sits on a dry lakebed in a wild and somewhat arid landscape, surrounded by barren hills surmounted by fortresses and crenellated walls.
Overnight at hotel

Day 15 Jaipur
After breakfast Proceed for morning excursion to Amber Fort with the Elephant ride to ascent the fort.
Amber Fort: At a distance of 11 kms from Jaipur, Amber was the ancient capital of Jaipur state. Construction of the fort began in 1592 by Raja Man Singh, the Rajput commander of Akbar's army and is a superb example of Rajput architecture.
Afternoon visit to the City Palace, Hawa Mahal and Jantar Mantar (16 the century Royal Observatory built by King Jai Singh-II)
Overnight at hotel

Day 16 Jaipur/Delhi
Morning at leisure.
Later check out from the hotel & drive to Delhi.
Upon arrival Delhi, check into the hotel.
Delhi, the capital of kingdoms and empires is now a sprawling metropolis with a fascinating blend of the past and the present. It is a perfect introduction to the composite culture of an ancient land.
Overnight at hotel The Radisson

Day 17 DELHI-ONWARD
On time transfer to airport to board flight for back home or onward journey.
Tour Ends…
(Check in international flight begins 3 hrs before schedule departure timing).

On arrival at Kaziranga , check into hotel.
Overnight at hotel in Kaziranga.