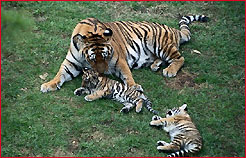 Earlier the hunting preserve of the Maharajas of Jaipur, the Park at Ranthambore was once the scene of royal hunting parties. Today, it is famous for its tigers and is one of the best places in the country to see these majestic predators in the wild.

Tigers can be spotted quit often even during the day, at their normal pursuits - hunting and taking care of their young. With the strict measures that have been taken for their accustomed to human activity and are not disturbed by it. A good time to visit is between November and April when the nature of the dry deciduous forests makes sightings common.

Ranthambore has large numbers of sambar, chital and nilgai. Sounders of boar and an occasional gazelle - the chinkara can be seen, as also the Indian hare, mongoose and monitor lizards.

The lakes and pools at the Park are where the deer congregate and where it is easiest to see the animals. Among the other local fauna are the leopard, hyena, jackal, jungle cats, sloth bear and marsh crocodile. Jacanas. painted sto-k. hiaci-. stork, and white necked stork are seen along the water bodies. Peafowl are found in abundance and other birds include Bonelli's eagle, crested serpent eagle, the great Indian horned owl, quail, partridge, spur fowl and the paradise flycatcher.

The Park which covers an area of 392 sq. km. is set between the Aravalli and Vindhya ranges. Its deciduous forests were once a part of the magnificent jungles of Central India. The terrain is rugged and there are rocky ridges, hills and open verfteys with lakes and pools. Ranthambore's royal past manifests itself in the picturesque ruins that dot the Park.

There are lake palaces, chhatris, old fortifications and a majestic thousand year old fort. On a height overlooking the Park. The forest rest house at the foot of the Ranthambore fort is located in the lovely Jogi Mahal. It overlooks a tank - the pretty Padam Talao, afloat with water lilies.